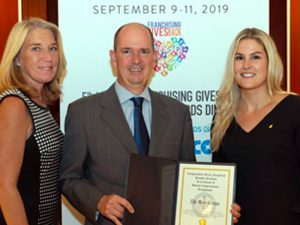 NEWTOWN, Pa. – September 12, 2019 - The Rose Group, franchisee of Applebee's Neighborhood Grill & Bar locations in Delaware, Maryland, New Jersey, and Pennsylvania, was the Gold winner of the “Spirit of Franchising Award” presented by the International Franchise Association (IFA). The award recognizes charitable or community support programs that embody the spirit of “giving back to his or her local community.”

The Rose Group’s award includes a $5,000 contribution by IAF to Alex’s Lemonade Stand Foundation (ALSF), to which The Rose Group is a founding supporter. The Rose Group began its relationship with ALSF in 2005, with 67 restaurants participating in that year’s fundraising promotion. Based on their example, there are now over 1,100 Applebee’s restaurants nationwide participating. This year Applebee’s locally and across the nation raised $1.5 million for Alex’s Lemonade Stand Foundation, bringing the fifteen-year total to over $11 million.

The Spirit of Franchising Award also recognizes The Rose Group’s dedication to fundraising within their local communities and their culture of supporting their own employees in need of financial assistance. “Each year, our restaurants and our employees raise between $1.3 and $2 million for local charitable organizations,” notes Cathi Chuck, The Rose Group’s vice president of marketing and public relations. “Since 2010, we’ve raised over $14.5 million in fundraising and in-kind support to community nonprofits and organizations.”

The Rose Group’s charitable support also extends to their employees through ‘The Rose Fund,’ a 501(c)(3) charity that was established to provide assistance to employees that find themselves in a financial crisis brought on by catastrophic life events. In the past year, the fundraised over $34,900 in employee and company contributions and distributed over $50,100 in assistance.

“From the moment The Rose Group opened its doors, we’ve made it a priority to be involved in the community,” says Ms. Chuck. “We are extremely proud that our fundraising programs help so many local groups and individuals.”